Parasite as reviewed by a Student of Psychology 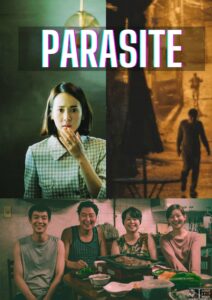 Where to Watch: Streaming on Amazon Prime Video

A little summary before we get started...

Oscar-winning film Parasite is a 2019 South Korean dark comedy thriller, directed by Bong Joon-ho, that follows a poor family who schemes to become employed by a wealthy family and infiltrate their household by posing as unrelated, highly qualified individuals. Parasite took home four awards at the 92nd Academy Awards, making it the first non-English language film ever to win Best Picture at the Academy Awards. The plot of the movie follows the Kims, a poor family consisting of parents Chung-sook and Ki-taek, as well as their young adult children Ki-woo and Ki-jung, living in a shabby half-basement apartment in Seoul’s lower working-class area. They, specifically Mr. and Mrs. Kim, reek of poverty literally without even realising it.

The family frequently commits minor scams as a group to get by and survive. Ki-woo wishes to escape poverty by attending university one day. Despite not having that education, Ki-woo is chosen by his university student friend Min, who is leaving to go to college, to take over his tutoring job to Park Da-hye, who Min plans to date once he returns to Seoul.

The Parks are an obscenely wealthy family who have lived in their modernistic home designed by former residence and renowned architect Namgoong for the past four years. While Mr. and Mrs. Park are all about status, Mrs. Park has a flighty, simple-minded attitude that allows Ki-woo to lie to her about his education to get the job. Ki-woo also learns that Mrs. Park is looking for an art therapist for the Parks’ young son, Da-song. He quickly suggests his professional art therapist friend “Jessica,” who is actually his sister Ki-jung, to pull off the con. As a result of Ki-woo falling for Da-hye, he begins to envision himself in the Parks’ home, and the Kims as a group devise a plan for all of the family, including Ki-jung, to replace existing servants in the Parks’ residence by orchestrating reasons for them to be fired.

Moon-gwang, the Parks’ housekeeper, is the most difficult to get rid of as she was Namgoong’s housekeeper when he lived there and thus knows all the ins and outs of the house better than the Parks themselves. A twist in fate one night leads to Moon-gwang revealing a personal secret hidden underneath the house to the Kims and her also uncovering the Kim’s own devious plans. Chaos ensues and the plot then becomes how far the Kims will go with this con to become their version of the Parks. The stage seems to be set for unceasing winner-take-all class war and the climax of the film leaves us all in shock as blood is shed and deaths are cast at the birthday party of the Park family’s youngest child.

Parasite hence is a thriller one might never forget for its depiction of societal structure, class divide, violence and desires in such an enigmatic, engaging and thought-provoking way.

Parasite was an international film that I discovered one lazy night in 2020 and continued to watch 3 more times in the theatres after, for its sheer cinematic brilliance. The fact that Parasite went on to become multiple accolades winning movie stands as proof of how relevant and impactful the film is. It is one that made me think and feel in abundance. Beautifully acted, scripted, shot and conveyed, Parasite has come to be a movie that I deeply admire.

The riveting black comedy leaves us on the edge as it explores how greed and class discrimination threaten the newly formed symbiotic relationship between the wealthy Park family and the destitute Kim clan. The film deals with many social themes – the use of numerous symbolism, motifs, dialogues and foreshadowing to depict and highlight prejudices of the class structure, social hierarchy, and violence.

One of the most evident and persistent themes in the film is class. Parasite’s social commentary on class is at its strongest in its depiction of the lower classes fighting against each other rather than against the 1% rich who hold more accountability. Throughout the film, wealth is depicted in a variety of ways. It’s portrayed as something that makes you brighter and nicer, but also as something that dulls your sense of accountability and keeps you “out of touch” to the realities of suffering. In many ways, the Parks are kind, but they are also shallow, helpless, and naïve.

The Kim family’s dream is to mimic the financial security of the Park’s. One might even analyse the central ‘parasite’ in the story to be class inequality itself. The Parks’ aspirational wealth is a parasite of competition, a nagging sense of “never enough.” Similarly, the poorer characters suffer from the same parasite; with the desire to leech off the wealthy, rise through the ranks and enjoy the benefits of money. The class struggle depicted by Bong Joon-ho is directly linked to the inequalities built into a capitalistic system’s social hierarchy.

The use of linear movement to symbolically depict class mobility and hierarchy with the help of staircases, basements and semi-basements is a clever addition to the film’s cinematography. Mr Park is a well-educated businessman who has benefited from the fact that he comes from a wealthy family. The Kims’ predicament, in which they are unable to find work, is a reflection of their position within a capitalist economy, and not of their abilities. Bong Joon-ho creates scenes in which poor characters not only have a lower quality of life, but their very lives are in jeopardy. For example, the Parks return home and cancel their camping trip on the night of a rainstorm but Da-song is still able to spend the night in a waterproof tent in the backyard. However, when the Kims return to their basement apartment, their entire street is flooded with sewage water, rendering their apartment uninhabitable.

Bong demonstrates how being lower-class is not just about not having access to the same luxuries as the upper classes, but also about being more vulnerable to death. The film gradually introduces violence as a companion to class inequality and desperation. The Park family commits psychological and political violence against the Kim family, inviting them into their lives but also excluding them in ways that reveal their inequality. When the Kims visit the Parks, Chung-sook teases Ki-taek by calling him a “cockroach,” an allusion to the structural violence they face as poor people. Mr Park commenting on the “smell” of the Kims also highlights the class prejudice that the rich harbour. The conflict between Moon-gwang, her husband, and Kims is perverse violence in which each party fights to maintain their relationship with the Parks’ wealth in the hopes that it will protect them from life’s hardships.

The film also demonstrates how wealth and discrimination contribute to the violence that erupts in the final act. The horrific act of aggression at the end affects all three families present. Ki-jung is killed, Ki-woo is brain-damaged, and Ki-taek is forced into hiding after he snaps and commits a classism-driven murder in the chaos of the birthday party. With the act of stabbing, the metaphorical themes are presented as literally as possible. Another underrated social theme in the film is that of the “family”, the protectiveness, solidarity and bond among familial groups and the kind of roles the matriarch and patriarch take up in contemporary nuclear Asian households. Despite being a film very Korean in its cultural contexts, the messages of classism and the wealth divide are inherently universal and cross all cultural-barrier. Maybe why Parasite is now recognised as a modern-day cinematic genius across the world and stays relevant for its social commentary

Do check out The Wailing, another South Korean movie you’d love!