Predator 5 is in the making! What should you expect? 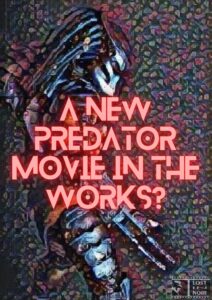 Let us talk about the elephant outside the room. Sure, some of you ardent fans, not unlike me, are familiar with the developments of the new Predator movie, but for most of you out there, this is news you have not heard. Probably, you don’t even care… not after they sabotaged the previous film in the saga, “The Predator” with silly innuendos and gimmicky umm everything! But hear me out, for we finally might be arriving at the release of a film that might be damn good, and if I may, even better than 1987’s original – Arnold – macho – Schwarzenegger version.

Before we speak about why the new film is going to be a modern-era breakthrough, let’s revisit the first film. The film that got us all going, “You are one ugly mother…!”

The OG Predator movie can be simply put, characterised by Macho Men, Boisterous dialogues, a sweaty Jungle, 80’s action, and gratuitous violence. John McTiernan, the director at the helm is well known for this archetypal filmography. You don’t have to look beyond the Die Hard franchise to nod your heads in cohesion with me. Predator was no different.

Predator almost plays like a Rambo film, which it, was surprisingly intended to be until it became the human hunting alien movie we have come to love. Call it horror or an action film, but it plays like a suspenseful slasher film that piques with the ultimate showdown between Arnold’s Dutch and the jungle hunter who likes his invisibility cloak.

Predator was the first film I saw and is a film I can rewatch multiple times, over and over without fatigue. The heat, the building tension, and the Predator that lurks in the trees, all pave for sequences that are memorable and very “quotable”.

Or, Arnie’s heavily meme-d, “Get to the Choppa”

Or, the scene where the whole troupe unload a shitload of bullets over the jungle to maim the Predator

There is something for everyone, especially for those who like a bit of Cheesy action.

Let us not digress… The film has aged well. The testosterone-fuelled ride has not diminished the slightest. The characters still captivate and the eponymous Predator still thrills.

The film cashed on Arnold’s fame and heavy-duty action scenes to first gain fans but became a cult on its own merit. And that is where the sequels started going awry. And, fans like me kept getting our hearts broken. Not once, not twice… countless times.

The Predator movie formula that became a bit too formulaic

You see, the films that followed wanted to recreate the same magic that worked for the first film. Predator 2 went with the same settings merely replacing the jungle aesthetic with downtown LA. The AVP films brought in a rich culture to Predator lore, albeit lost in translation as they resorted to mimicking the earlier films. Then in 2010, Nimrod Antal’s Predators sort of remade the first film with more grit and gore. So, don’t take me wrong, all these films are damn watchable and might I say, entertaining.

But, are they unique? Do they offer something better or for worse something different? They all peas in a pod, be the same kind of rehashed films overdone by boring writing and underdone by lack of imagination.

It was the final nail in the coffin when Shane Black, a director (damn good dude with his dark comedy films) whose, at least one film you might have watched decided to create “The Predator”. There was hope in the air; of a revival of the beloved franchise. After all, Shane had been involved with the 1987 film as both Cast member and Screenplay artist. There was no way the film was gonna suck. At worst, it was going to be like the other films. At best? The best damn film yet.

The Predator went above and beyond and came out sticking like a sore thumb that took away everything fun about the Predator franchise yet still retaining the same old repeating elements. I guess you could say, same coffee shittier flask. Not to put too much flak on him, but dude… You had one job! To maintain the integrity of the Predator movie that you, I, and the fans love. Alas, all busted by a feverish extravaganza that might be a parody on the franchise. With jokes afresh and characters acting like they are in a Harold and Kumar film.

What sucked the most was, if the actors were amazing to watch. Keegan Michael Key (from Key and Peele fame) and Thomas Jane were absolutely delightful to watch. As if, they were from another movie altogether. This sucked more… It seemed for a while that The Predator had closed doors for all Predator movies yet to come. No more for us we thought. Whining and Pining spent I, my days. For the Predator tombstone had been supposedly laid… Once and for all! What a tragedy…

The new Predator Movie on the table...

2020, a shitty year nonetheless, ended on a high note. Rumours of a new Predator movie were afloat. Dismissing the rumours were temporary, as news began to spread. Indeed, they were making a new movie. At the helm is 10 Cloverfield Lane fame Dan Trachtenberg and donning the writer cap is Patrick Aison. If their past filmography is anything to go by, we can await a twisty suspense-laden thrill ride. But, should we be cutting them slack that we did for Shane? Is our trust misplaced? After what we have gone through for over three decades, we should not be chastised for our paranoid misgivings.

Yet there is hope in the form of plot rumours all over the internet. Apparently, the yet to be named Predator movieundergoing production under the codename, Skulls is going to be about “a Comanche woman who goes against gender norms and traditions to become a warrior”. The film is supposed to be set in America before the European Colonization.

If this little is what we have to go by, we actually have a lot to go by to make a good case on why the movie is gonna legit rock. First, it suggests throwing out the comfortable habitat concept that all the previous films tastelessly rehashed. Subsequently, we have a new protagonist, and hey! It is not a  macho talking alpha male go to. The film has the opportunity to craft a modern Symbol character that the alien Franchise accomplished several decades back with Ellen Ripley.

Ripley was my role model growing up and is one of the most fleshed-out characters in sci-fi history. Science fiction films in the modern era have rarely ticked the right box for characterisations and even more so dubious are their exploits in writing real-life female characters. Rarely they transcend over meeting plotline needs and become lively vessels. Oh my! How I miss Ripley…

Sure, I am jumping the gun here. The film is still pretty far away from release. But, as the days come by, we will be getting a better overview of things to come.

Rest assured, I will be here covering my love for the Predator franchise.