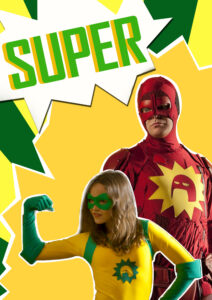 Where to Watch: Amazon Prime Video (Not Available in some regions)

I just finished watching ‘The Office’ a few weeks back and quite naturally became a huge fan of Rainn Wilson who portrayed’ Dwight K Schrute’ in the series. I was searching Rainn Wilson’s filmography when I happened to stumble upon this film ‘Super’, I checked out the trailer of the movie and decided to give it a try. I was kind of expecting a comedy/vigilante movie, but this one had a lot more to offer.

Directed by James Gunn, Super is the story of a guy named Frank, the hardships he’s had to suffer and how he chooses to fight them. Frank played by Rainn Wilson is a very innocent guy who lives in his own world and is being constantly let down by the ones whom he holds close.

The film doesn’t dwell too much into his past but still manages to capture the ordeals he has had to face and how he chooses to silently suffer them. Frank works as a cook and is married to the waitress who is also an ex-drug addict. Frank loves his wife so much but this affection isn’t reciprocated back and Frank realises that he is losing his wife as she slowly goes back to her old drug addiction days.

One fine day she leaves Frank for a drug peddler and thus hits the peak of Frank’s sufferings till date. Frank believes that this drug peddler (played by Kevin Bacon) stole his wife and thus begins his frantic efforts to ‘save’ his wife.

Frank decides to fight crime based upon visions he is having and becomes ‘the Crimson Bolt’. He later teams up with a young girl Libby(Ellen Page) who adopts the name Boltie. Both of them wear costumes and start fighting crimes with some harsh/brute techniques.

The movie does have some laughs in it, but it is disturbing as well. The comedy is actually a  bit dark and at times more than laughing you do tend to sympathise with Frank and his rash methods. He is deeply influenced by religion and believes that everything in this world has an order of its own. The visions or dreams he has are all a manifestation of his beliefs and his subsequent actions reflect the same. “You don’t butt in line, you don’t sell drugs, you don’t molest little children, you don’t profit on the misery of others! The rules were written a long time ago, they don’t change! ”

This line by Frank towards the end of the movie captures his agony and his rough attempts to fix whatever is wrong with the society.

Why you should watch Super!

Just because the movie is disturbing, doesn’t mean it’s a bad watch. It’s definitely worth a watch and Rainn Wilson is a delight to watch on screen. Frank reminded me of Dwight from the Office, but a more innocent and kind hearted Dwight to be precise.The movie rests mostly on Rainn’s shoulders and he does manage to carry it quite well despite a few shortcomings.

It would have been nice if Libby’s character and the antagonists were more properly developed, but the film focuses on Frank and his emotions most of the time. The film ends on a good note and if you are into vigilante movies, do give this a try.